Monkeypox may become endemic in the US just like the West Nile Virus did after spilling over into the wild mosquito population two decades ago, an expert warns.

Dr Bobbi Pritt, a pathologist at the Mayo Clinic in Minnesota, told DailyMail.com a key similarity between the diseases was that both had spread under the radar before being detected.

But she said monkeypox is likely to prove much easier to control because it was mostly being spread through sexual contact with infectious skin lesions, whereas the other is ‘indiscriminately’ transmitted by mosquitoes.

The West Nile Virus (WNV) became endemic to the US just a year after its arrival and is now the leading cause of mosquito-borne disease in the country – sparking tens of thousands of cases every year.

About eight in ten people infected with the virus suffer no symptoms, but for those that do one in five face a fever, headache and vomiting while one in 150 can suffer encephalitis – inflammation of the brain. About 70 deaths related to the disease are recorded every 12-months.

European health chiefs have warned monkeypox could also jump into the animal population, although add the risk remains ‘very low’. There was a risk the tropical disease would in 2003 when it infected more than 40 prairie dogs, but the outbreak was eventually snuffed out.

The warning comes after America recorded another 28 cases of monkeypox over this weekend and the Juneteenth across 23 states and Washington DC New Jersey, Indiana and Missouri were the latest states to detect the disease this weekend. The tally has now hit 142, but no deaths have been recorded in the US or other countries currently facing an outbreak.

The above map shows states that have detected monkeypox (Red) in the current outbreak and those that are still to, the cumulative number of monkeypox cases every week day (left) and cases by state (right) 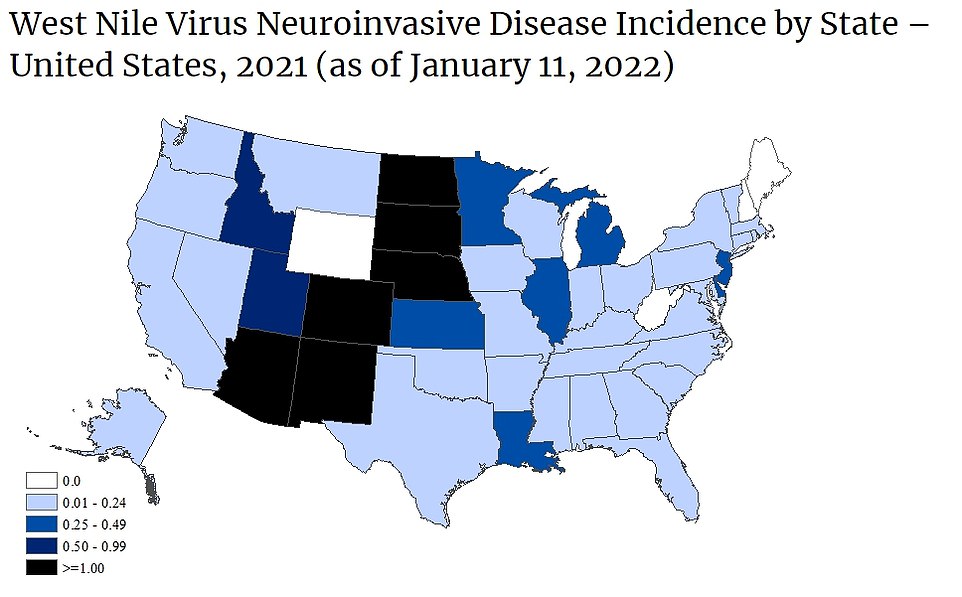 The above map shows states that have detected West Nile virus this year. The incidence rate is per 100,000 people. Hawaii is yet to report its disease incidence 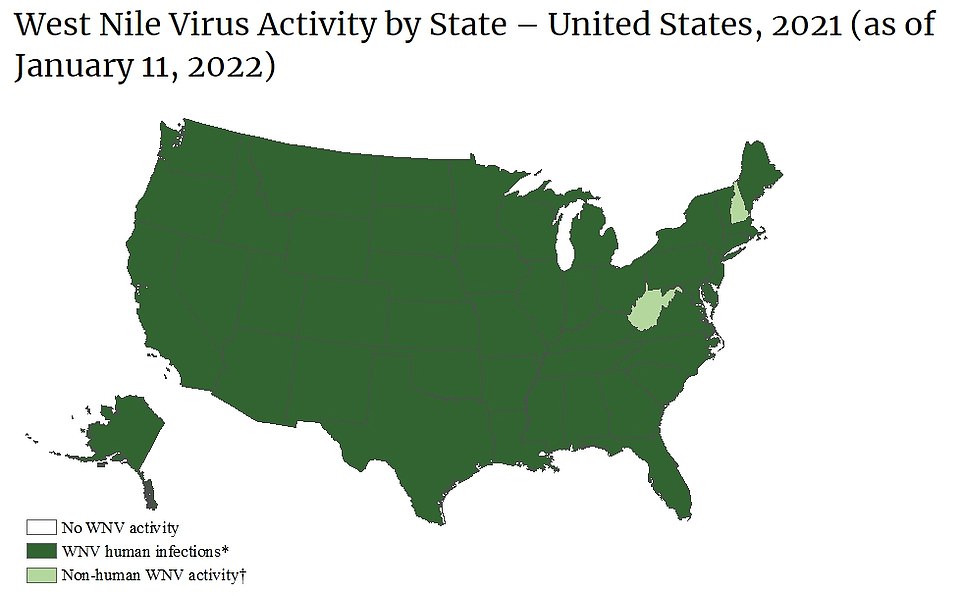 The above map shows the states that have reported West Nile Virus in humans (dark green) and other animals (light green) since 2021. It shows the virus is now in every state of the country. Hawaii is yet to report its case count

Warning that monkeypox could become established in the US just like WNV, Pritt said: ‘I would hesitate to say monkeypox is endemic yet, although it definitely has this potential.’

‘It will be, however, easier to prevent monkeypox from spreading.

‘They have quite different modes of transmission. WNV is spread through mosquito bites and is really quite indiscriminate. But monkeypox is mostly spread through sexual contact, at the moment particularly among men who have sex with men – although it could reach other populations.

What is West Nile Virus? What are the warning signs? Is there treatment?

West Nile virus is a disease spread by mosquitoes, which can pick it up from birds.

It was discovered in Uganda in the 1930s and is now found on almost every continent in the world. It reached the US in 1999, likely on a shipment from the Middle East.

The disease now triggers tens of thousands of cases every year, although most go unreported because eight in ten develop no symptoms.

People who catch the disease generally do not show symptoms until three to 14 days later.

Those that do develop warning signs tend to suffer flu-like symptoms, muscle pain and headaches.

About one in 50 cases develop severe illness, however, where they can face coma, tremors and paralysis.

About one in 150 patients could also suffer from encephalitis — inflammation of the brain — which is life threatening.

There is no specific treatment for West Nile Virus patients, but severely ill patients will be admitted to hospital for close monitoring.

People with mild illness are recommended to get over-the-counter pain relieves to reduce their fever and other symptoms.

About 70 people die from the disease in the US every year.

‘This could be stopped by practicing safe sex.

‘There’s more chance of stopping it than WNV. With WNV it can only really be stopped by wearing insect repellent. ‘

American health chiefs took nearly two weeks to diagnose their first case of monkeypox in Massachusetts after standard swabs failed to detect other infections. They only decided to test the patient for the tropical virus after spotting alerts from Europe – led by the UK – over the outbreak there.

In comparison, a WNV outbreak was spotted in New York City in late August after eight previously healthy people who lived within 16 miles of each other were struck down with encephalitis.

The tropical disease has been known for decades after it was first spotted in the West Nile district of Northern Uganda in 1937.

Since then it began to pop up in several other countries across the continent, parts of Asia and even in Romania, Europe.

The disease arrived in the US in 1999, likely on a shipment that had come from the Middle East – where Israel was also experiencing an outbreak at that time. It is not clear whether it was in geese or another bird that was imported or arrived via mosquitoes that hitched a ride on a ship.

Health officials became suspicious of its presence in late August when they spotted suggestive cases in Queens. There also spotted many birds falling sick with a virus that had a high fatality rate.

WNV is spread by mosquitoes to humans and birds, after the insect picks up the disease from another infected animal – which could well be an unwell bird.

The following year they detected another outbreak of the disease, and within three years it had been recorded across as many as 44 states.

It also triggered a major outbreak in 2002 when a total of 4,100 cases were detected including more than 2,000 people who suffered from encephalitis. There were also 284 fatalities.

But Pritt said because so many people who catch the virus suffer no symptoms, it was likely the true case tally was in the tens of thousands.

Other experts have also warned monkeypox could mimic WNV in becoming established in the country.

Dr Amesh Adalja, an infectious diseases expert at Johns Hopkins in Maryland, previously told CNN: ‘It got seeded into the mosquito populations and … bird populations and was able to establish itself,’ he said.

But he also warned this was a far from inevitable outcome for monkeypox pointing out that ‘2003 was a good opportunity for it to happen’ but that this did not occur.

Monkeypox – which is native to West Africa – was first spotted in Europe in May, with cases traced back to unsafe sex at mass gatherings which took place in Spain and Belgium.

It was then first detected in the US a few weeks later in an individual who had recently returned from Canada, but the World Health Organization says it could have been spreading for years beforehand. 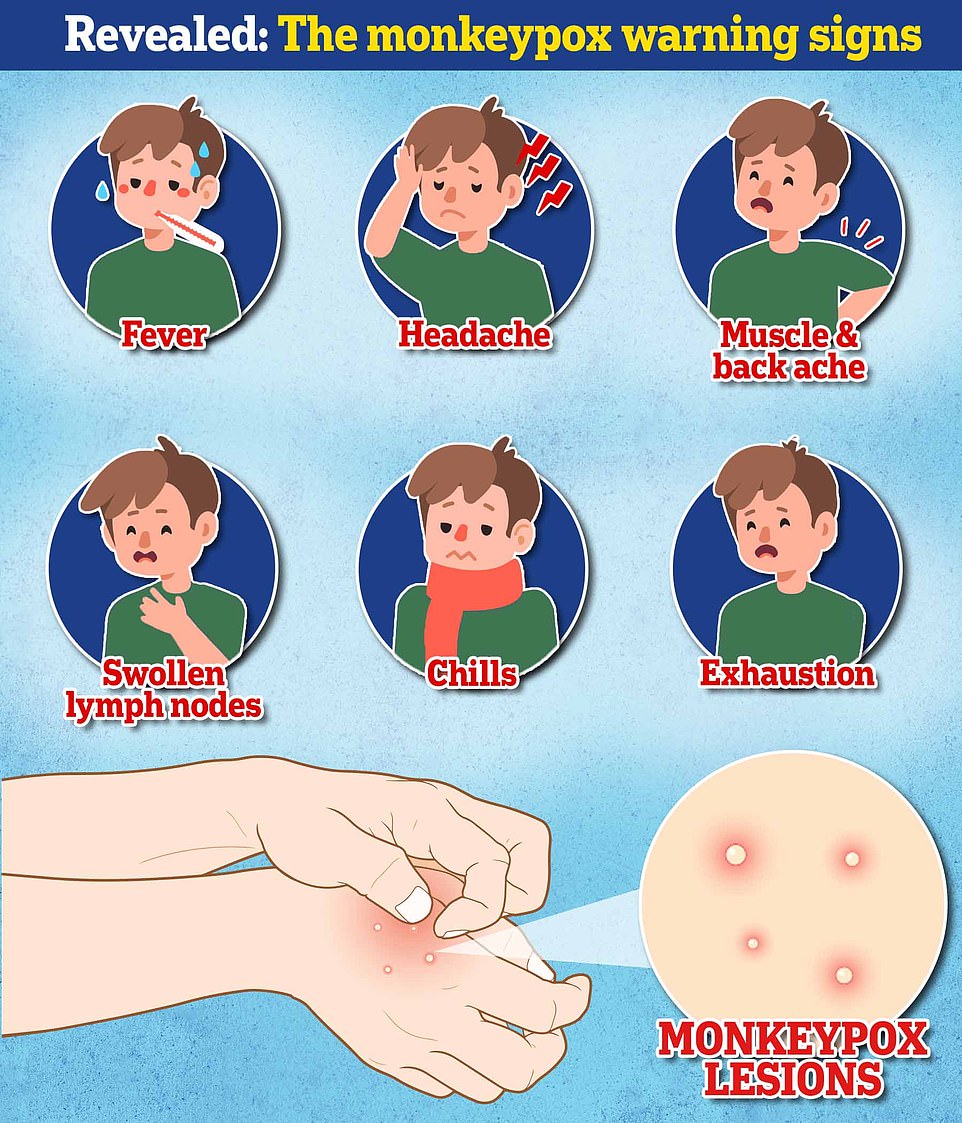 Officials are urging gay and bisexual men to be aware of new lesions, rashes or scabs and get in touch with a sexual health clinic

Timeline of monkeypox cases in the US

April 2003: A total of 47 people are found to have been infected with the virus after coming into contact with animals.

This was linked to a shipment of 800 rodents – including squirrels – from Ghana to Texas. Some of the infected animals were then moved to Illinois and housed near Prairie dogs. They passed on the virus to these animals, which then gave it to humans when they were rehomed.

July 2021: An individual in Texas is found to have been infected with monkeypox after returning to the US from Nigeria.

A total of 200 people were monitored for infection, but after 21 days none had developed symptoms.

November 2021: An individual tested positive for the virus after returning to Maryland from Nigeria. They did not pass the virus on to others.

May 2022: A man is found to have been infected with the virus after returning to Massachusetts from Canada.

Another case is currently being probed in New York City.

Most infections are being spotted among gay and bisexual men and linked back to international travel – including to Europe.

But a growing number of cases are now being spotted with no links to other infections or international travel, suggesting the virus is already spreading under the radar in the country.

It comes after New Jersey recorded its first suspected case of monkeypox in Jersey City yesterday, with a sample now being sent to the Centers for Disease Control and Prevention for confirmation.

The patient was told to isolate at home, and contact tracing is now underway.

They said on Instagram: ‘The NJ Department of Health has confirmed the first case of monkeypox in Jersey City. Our health officials are working closely with the CDC.

‘The local health department is conducting contact tracing to identify any individuals who may have been exposed to the individual.

‘Most New Jersey residents are not at risk of infection with monkeypox.’

Globally, the CDC counts 2,525 total cases across 37 separate countries, with the United Kingdom leading the way with 574 and Spain in second place with 497 confirmed cases of the virus.

Medical literature says that people infected with monkeypox experience flu-like symptoms within the first 21 days of catching the virus, followed by a rash that appears on the face before spreading to the rest of the body.

But this is rarely being observed in the current outbreak, with patients instead seeing rashes emerge on the genital areas before suffering any flu-like symptoms.

Dr Rochelle Walensky, head of the Centers for Disease Control and Prevention (CDC), said: ‘The disease is not spread through casual conversations, passing others in a grocery store, or touching things like door-knobs,’ she said.

‘All of the cases we have seen to date in this outbreak have been related to direct contact.’