We asked Iain Macintosh to manage Newcastle United on Football Manager 2022 and it was going really well for a while, but he doesn’t say much these days. He just sits and stares out of the window, occasionally mouthing the words “Federico Chiesa” and weeping.

There’s a knock at the door. I ignore it. It will eventually go away like all the others. I wish you could turn the door off, or let it run out of battery. That’s what I did with my phone. I glance over into the corner of the room where it sits, cold and dormant, half-submerged in a tin foil container of frozen chicken madras.

There’s another knock. Harder now. Someone’s got a bad case of persistence. It’ll pass. I try to focus on the laptop where the colored dots dance to my tune. Sometimes. Sometimes not so much. Just like real life. It ebbs and it flows like a river and perhaps the mistake we make is thinking that we can tame the river. But all we can ever really do is build a raft, ride the river and see where it takes us.

I take a last deep drag of the roll-up and drop it into the mug of tea that I didn’t drink yesterday. I’ve probably had enough of that, to be fair. It’s not the only thing I’ve had enough of, either.

Another knock, a triple-knock. Bang, bang, bang! Jesus. Nothing’s worth a triple knock.

There’s a long silence. I feel like I might have just given away my position there. But it’s not as if –

There’s a loud crash, a splintering of wood and suddenly the door bursts into my house like someone trying to buy the first iPhone. It’s followed by my assistant manager, Steve Bould, rubbing his shoulder and grimacing.

“Good door, that,” he says with a touch of admiration. “Solid.” He peers through the gloom at me. “Why haven’t you been at training for two days? And what’s that smell? It smells like damp cheese. ”

“Meh,” I shrug and try to discreetly close my laptop.

Bouldy strides over towards the sofa and grabs the computer out of my hands.

He opens up the laptop and his eyes widen.

“Why would you do this?” he shouts at me. “You’ve got the real thing, you don’t need this! Only perverts look at this stuff. ”

“I just wanted some control!” I wail.

“Then come back to work!” he roars. “The season isn’t over yet, you can’t walk away now.”

He hurls the laptop against the wall.

“Bullshit! You’re not tired, you’re scared. You blew a big game and you got knocked out of Europe. That’s life. Shit happens. No one will judge you by the way you fall, they’ll only judge you if you’re too scared to get back up again. ” He softens and ruffles my hair. “This isn’t you, God. Sitting around in your pants sulking. You’re not that man. ”

I start to cry.

“Come on,” Bouldy says quietly. “Pull yourself together. Have a shower, get some clothes on and we’ll go back to work. I’ll have a bit of a tidy-up. ”

“Don’t mention it,” he says, reaching for a bin bag. “But if I ever catch you playing Football Manager again, I’ll punch your lights out.” 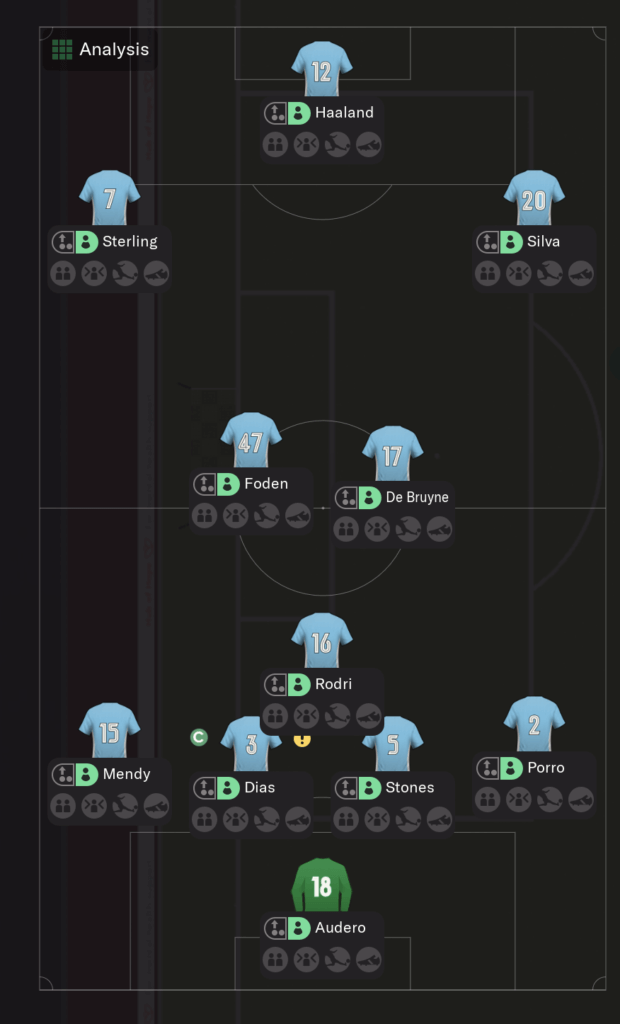 There’s nothing like a stroll across the Wembley pitch to lift your spirits. Bouldy was right. I shouldn’t have been sulking. What happened against City in the Champions League was bad, but we should be happy we got that far in the first place. And this is our fifth trip to the national stadium in the last year. If you can’t be happy about that, you just can’t be happy.

But I am furious with Allan Saint-Maximin when he hits the post in the first half. City goalkeeper Emil Audero comes out to punch away a cross and slaps it straight at my board game loving forward. If he’d just relaxed and taken a touch, it would have been an open goal. But he snatches at it.

We get to half-time still goalless, but we really should break the deadlock shortly after the break when Saint-Maximin sets Andrea Belotti free and Audero makes an incredible point blank save. Especially as Kevin De Bruyne then lofts a delicious pass between our defenders to set Erling Haaland clear on goal. 0-1.

That goal seems to trigger something in the players and all the energy from the first hour seems to dissipate. It’s been a long season for both clubs and, though we try to change direction with a couple of substitutions it comes to nothing, right up until the moment when Phil Foden wipes out Belotti in the box. With three minutes to go, my model professional, my number nine, oh captain, my captain, slams his spot kick into the bottom corner. 1-1.

And now the game is afoot. City are broken, even their substitutes are tired now and we have our tails up. We can stretch them, we make chances, we throw Benjamin Sesko on up top to pit fresh legs against tired legs. All of which makes it doubly upsetting when Foden redeems himself right before penalties by heading home a near post corner. 1-2.

We didn’t deserve that. But that’s the way this season seems to be going. Some excellent form in the league, two deep cup runs, but we still look odds-on to end up with nothing but Europa nonsense as a reward. I drive home alone, idly wondering if there’s anyone in town who can fix a smashed laptop on a Saturday night. 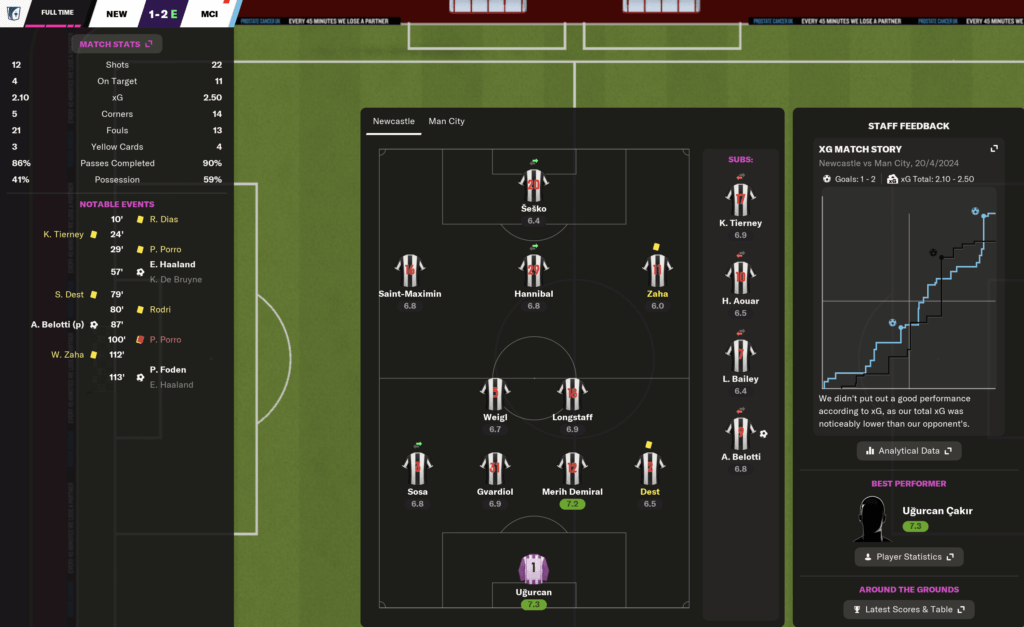 Bouldy is right though. It’s not how you fall, it’s how you get back up again. And we have to get back up for the trip to Brighton. I can’t ask anymore of these players, some of them have given me 210 minutes of football in four days. It’s an almost entirely fresh team, save for the ubiquity of Jools Weigl and Ugurcan Cakir. 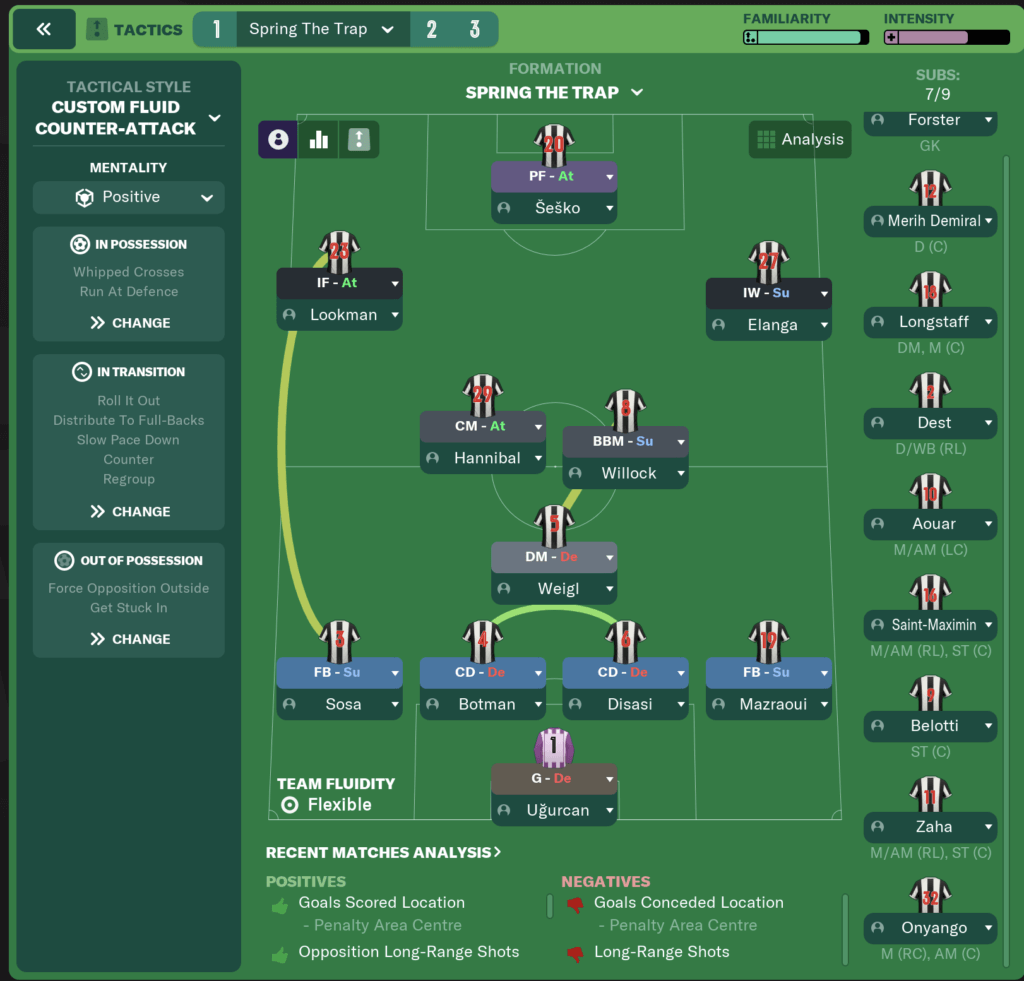 One of the problems with wholesale changes is that the players often look as if they’ve never played together before, or indeed played football before. We are so abject in the first half that I am compelled to berate them with such severity that I am later criticized for not issuing trigger warnings. This country. It works though, I always find there’s a renewed spring in the step of a man who has just had the legitimacy of his parentage questioned.

Noussair Mazraoui plays the ball of a lifetime to set Sesko scampering in on goal. He finishes well and we go in at the break 1-0 up. I still give them a bollocking because pointing out the shortcomings of others always makes me feel better about myself and I need that boost right now. 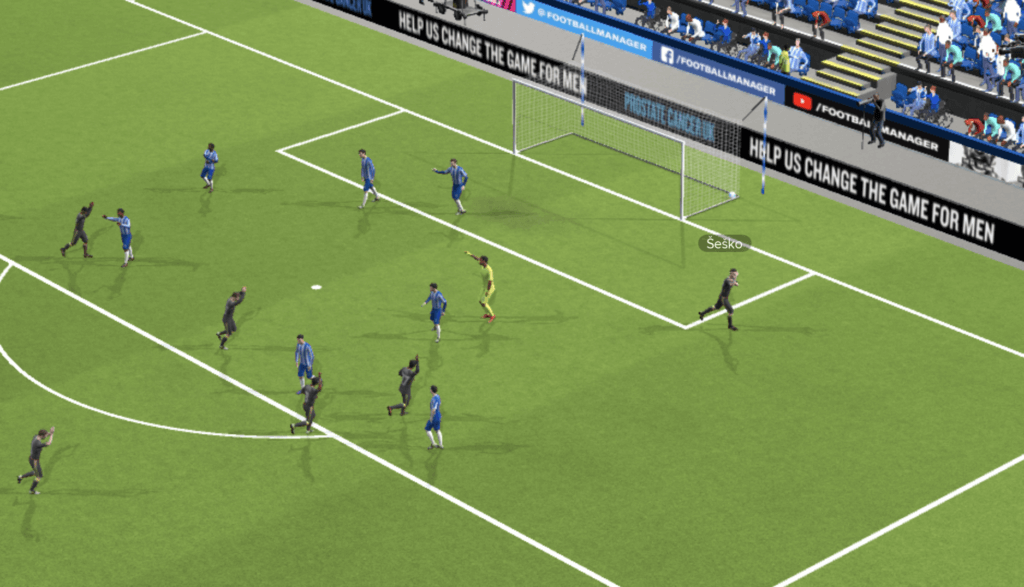 Fortunately, Brighton is taking steps to put the victory beyond doubt. Leandro Trossard gets himself sent off for trying to chop Antony Elanga in half, Elanga gets payback with a close range finish, they make a triple substitution and then they lose Tariq Lamptey to injury. I am, in all honestly, disappointed that we didn’t score more against nine men, but a win is a win. 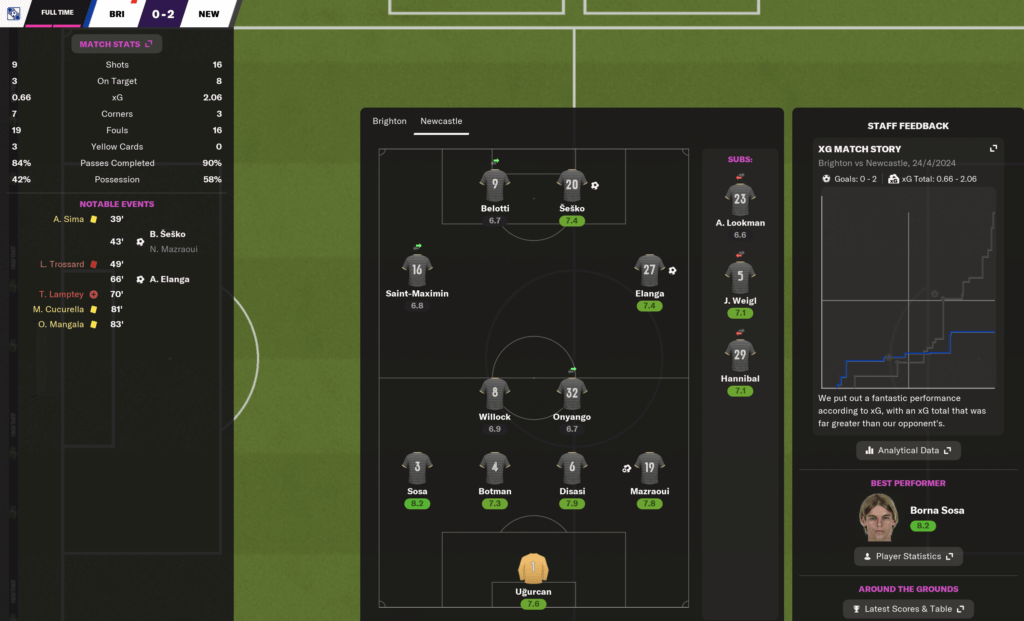 There’s no let-up, we go straight into another clash with haunted Stoke City relegation. I am wary of this lot because Tyrese Campbell nearly knocked us out of the FA Cup last season. We had to come back from 0-2 down to win 3-2 and you don’t easily forget a trauma like that. But resting the key players has replenished their energy levels and we are back to full strength. 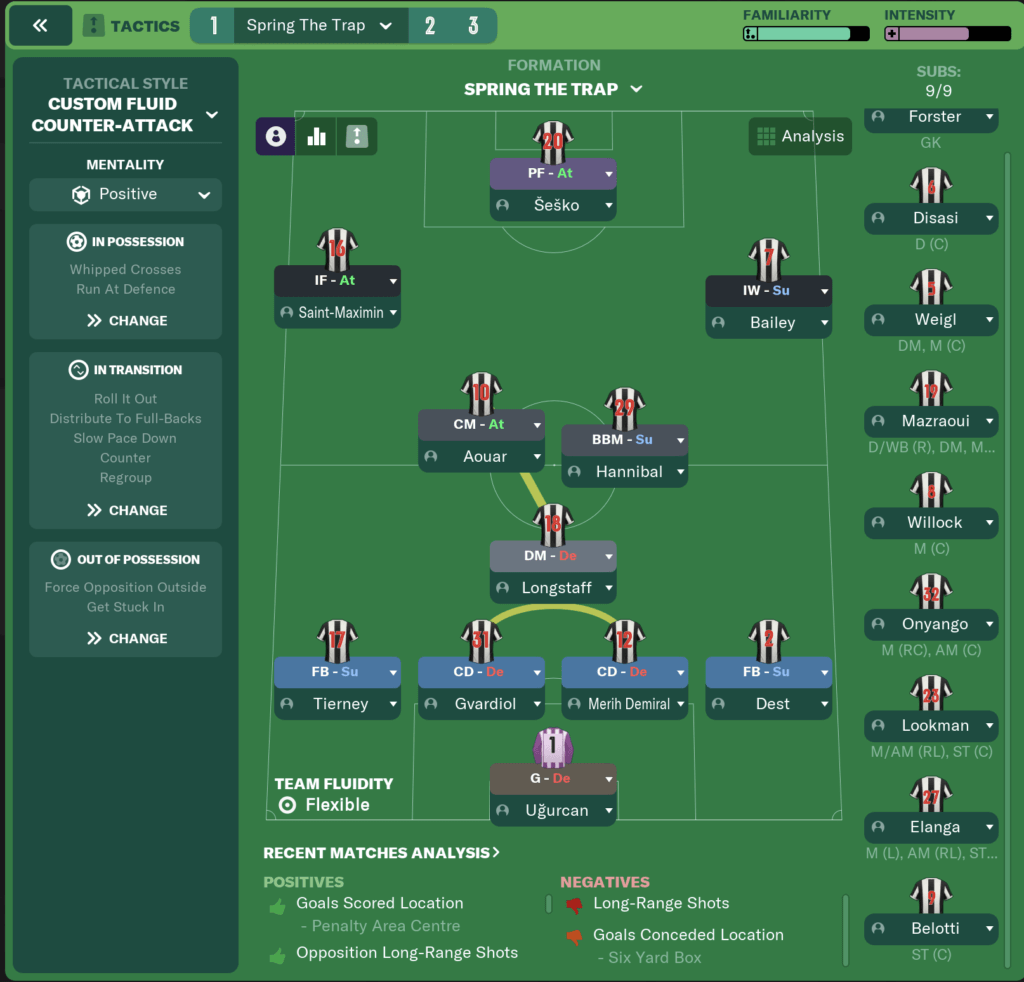 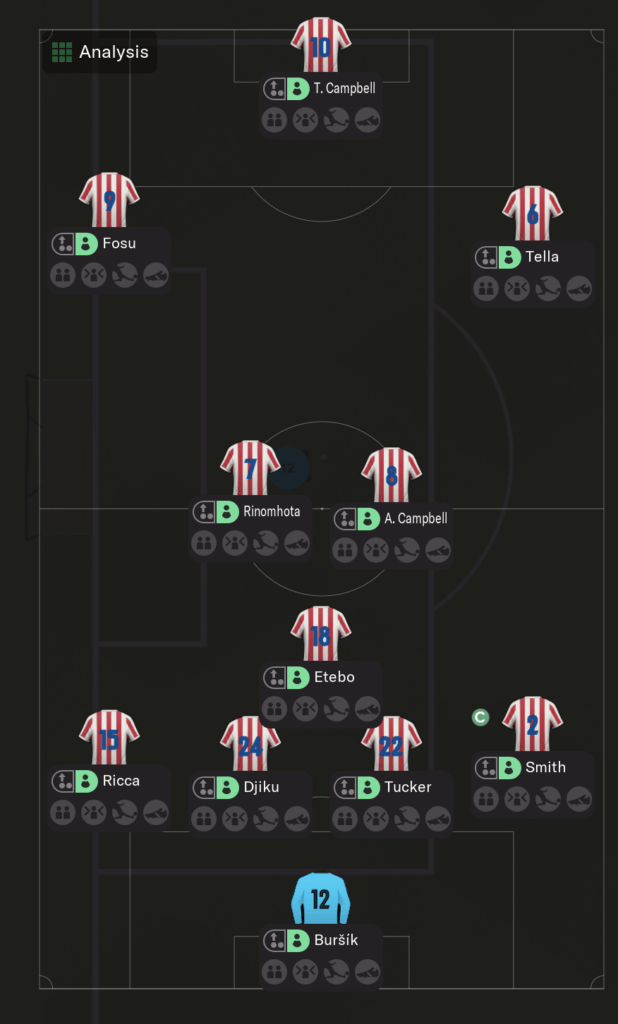 Stoke, as is their wont, are relishing the chance to bloody our nose and they get the first punch in early. Obviously, it’s that Campbell man who profits from a big ball over our defense, which stands in dumbstruck awe as he meep-meeps past them. No matter, we have fresh legs. We can recover. We make a stack of chances and I am able to tell them, hand on heart, that they’re doing nothing wrong. “You’ve just got unlucky,” I say. “They’ve scored with their only real chance, we’ll be fine.”

We are not fine. They score with their next real chance and it’s bloody Campbell again. This is serious now. Arsenal are losing to Bournemouth and this should have been a perfect chance to reel them in. I increase the tempo and pray that superior fitness pays off. It doesn’t.

We continue to waste chances, direct corners to defend, give the ball away in our own half and basically do all of the things that you can’t do if you want to win a football match. And with ten minutes left, Campbell nonchalantly slides a long, low effort home from 30 yards to complete his hat-trick. They haven’t even notched up an xG of 1.0, but they’ve beaten us 3-0. I am beyond words. 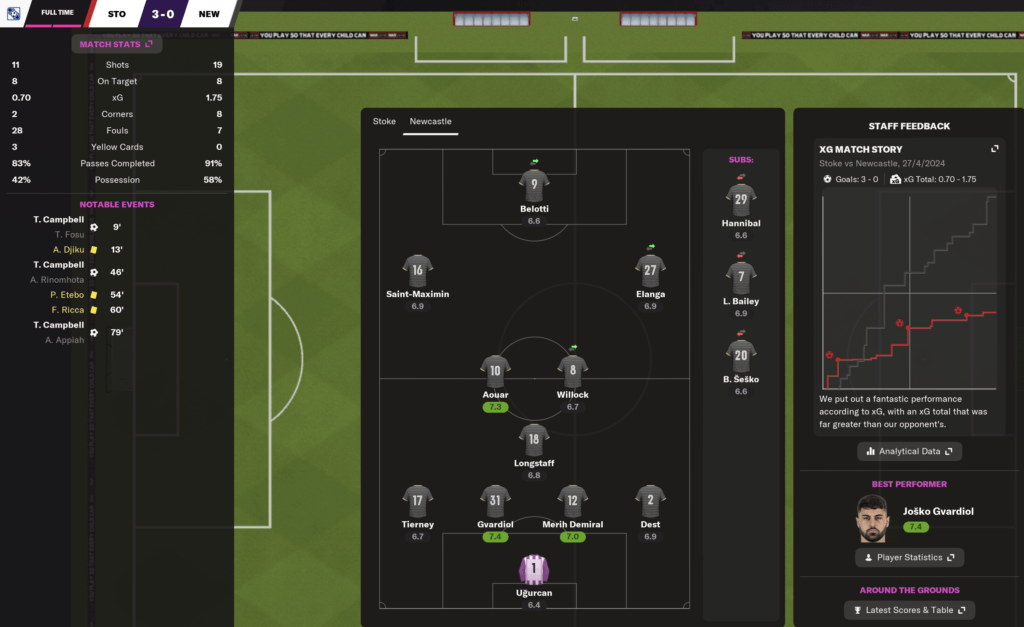 And so we have four games left to rescue our season. We started poorly, recovered magnificently and now we’re in danger of tossing it all away at the end. This just isn’t good enough and I am starting to ask myself serious questions. Have I taken this lot as far as I can? 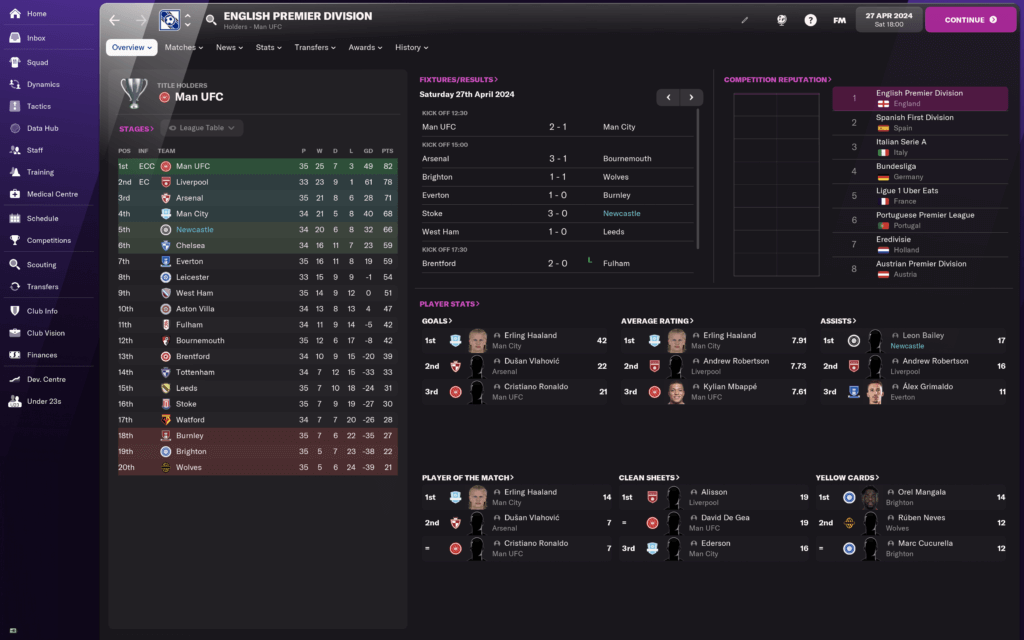 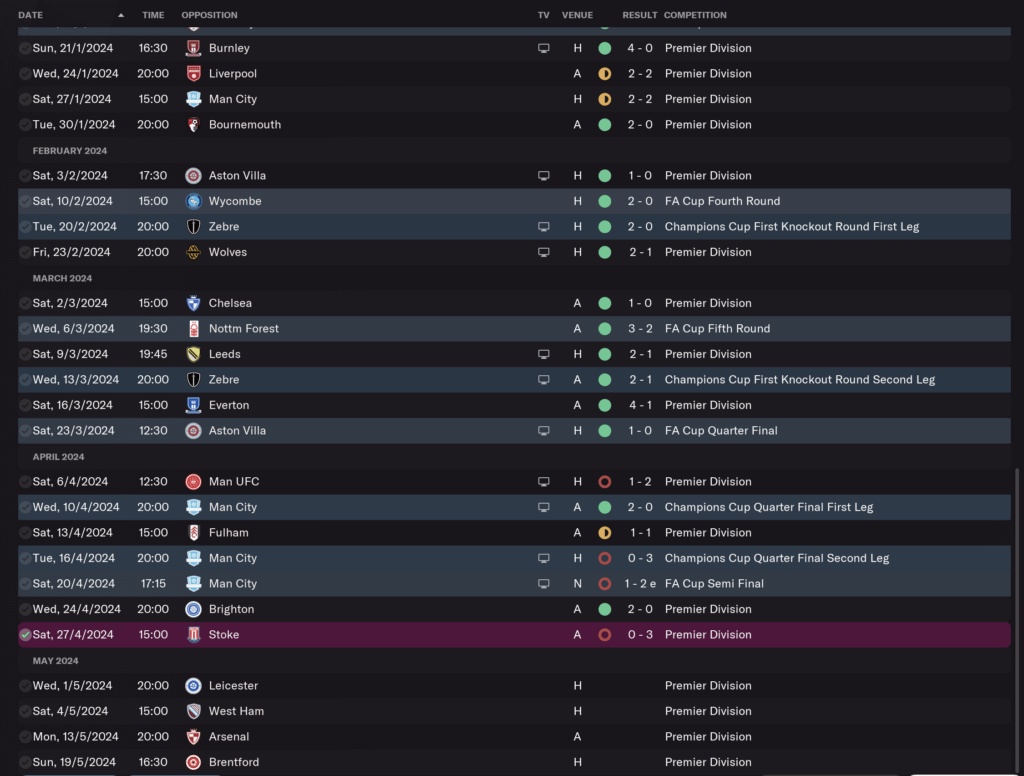 Want more on FM from Iain and his team? Why not check out his podcast – The Football Manager Show sponsored by Livescore – free on Apple, Spotify and all the usual podcast platforms, and of course ad-free on The Athletic.