The Tigers sport one of the most iconic looks in college football.

Largely unchanged over the decades, LSU is best known for wearing white jerseys at home (a tradition that has gone mostly uninterrupted barring an 11-year period from 1983-94) and its classic helmets.

The primary lids for the football team have mostly stayed the same since 1980, but with a surprising number of alternate options and slight tweaks you may not have even been aware of, the history of the Tigers’ Saturday style may be a bit more interesting than many thought.

Here’s a rundown of how LSU’s helmet design has evolved over the years.

Get your legendary 1939 LSU leather football helmet before the Battle begins. https://t.co/T7gfDVf73Y pic.twitter.com/Ayp02LxvIX

As was the case across college football during the era, LSU donned leather helmets up until the 1946 season. Though certainly not safe in the slightest, there was certainly a charm to these helmets. While many of us may think of the helmets from this era as being generic-colored, the Tigers implemented a purple and gold look that somewhat resembles the modern Michigan helmets.

When the Tigers finally ditched the leather helmets for hard ones heading into the 1946 season, they opted for an old gold helmet, which you can see in the picture above from a game against Texas in 1950. Like the leather helmets before them, these lids didn’t have facemasks. That change wouldn’t come until about a decade later. 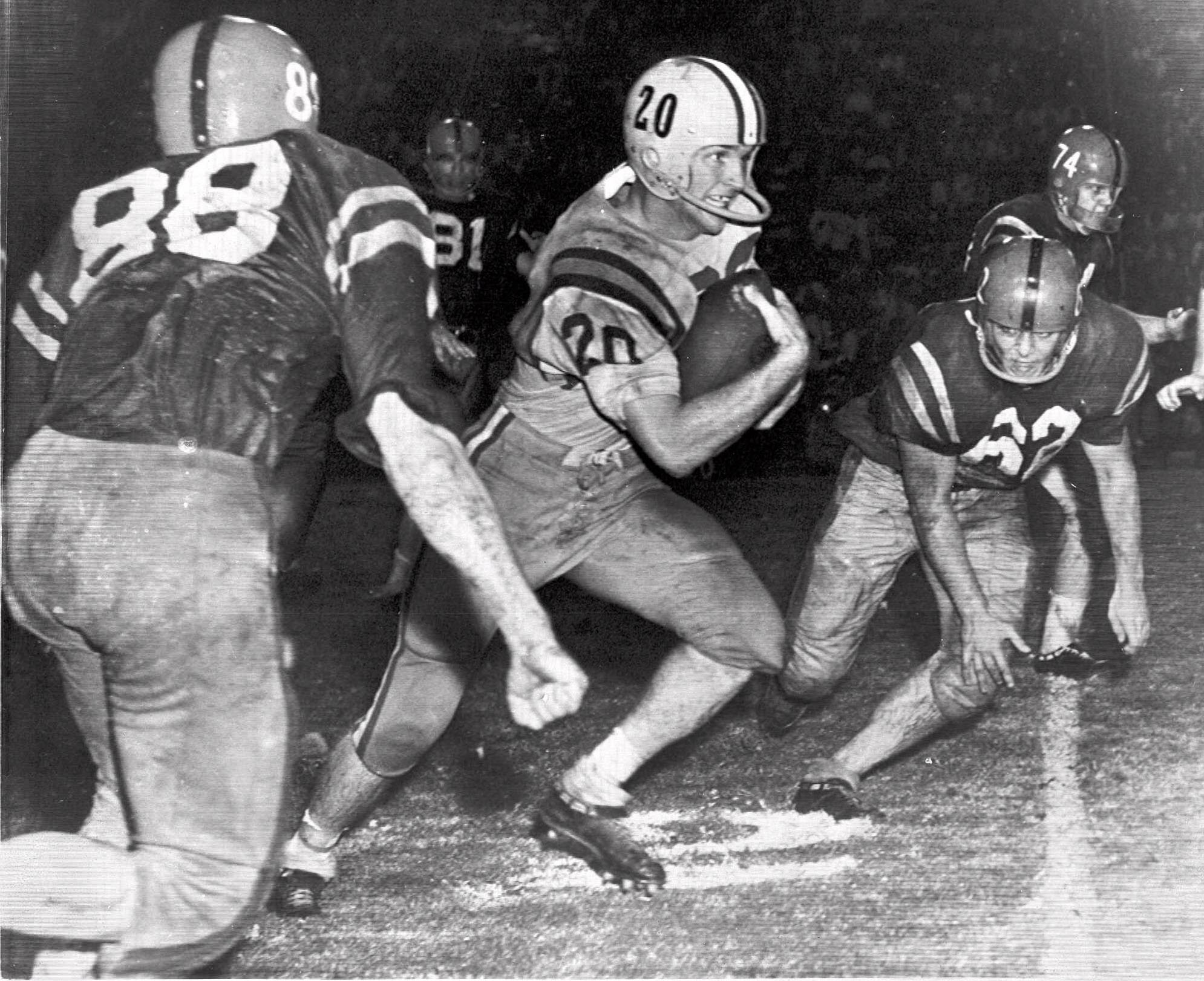 This was where LSU’s modern helmet began to take shape, though there were still many differences. In 1956, head coach Paul Dietzel changed the helmet color from old gold to a yellow-gold, and a year later, the Tigers began adding numbers to the side of the helmets. That’s a tradition that is mostly associated with Alabama these days, but it was quite common during this era of college football. These helmets also introduced the stripes down the center. 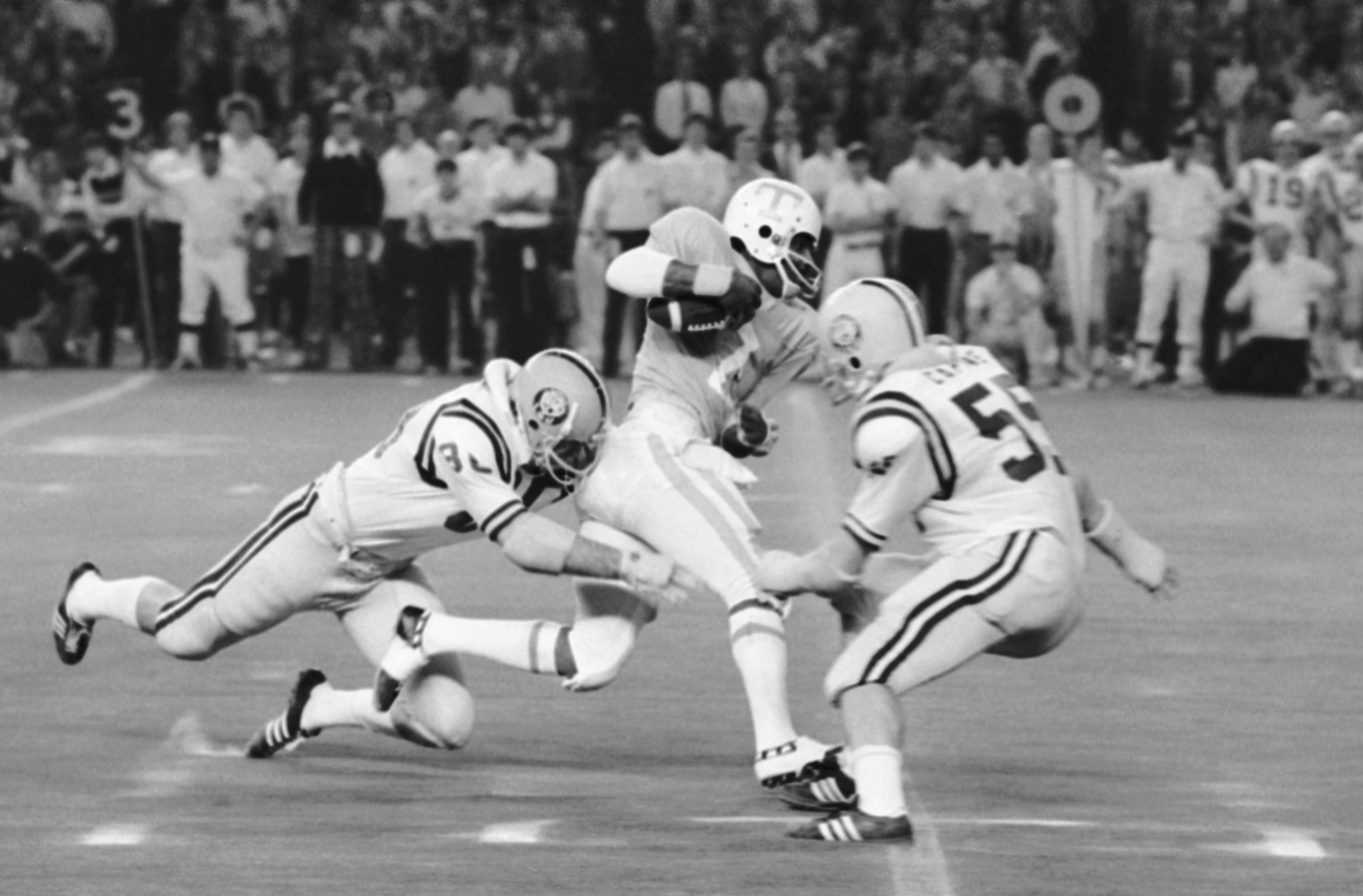 LSU made a big change heading into the 1972 season, debuting the Tiger logo that, despite a few changes, remains on the side of the helmet to this day. These helmets still bore quite a few differences from those that would take its place in just a few years, mainly the fact that the block “LSU” logo was inside the Tiger logo rather than outside it, as would later become the case. 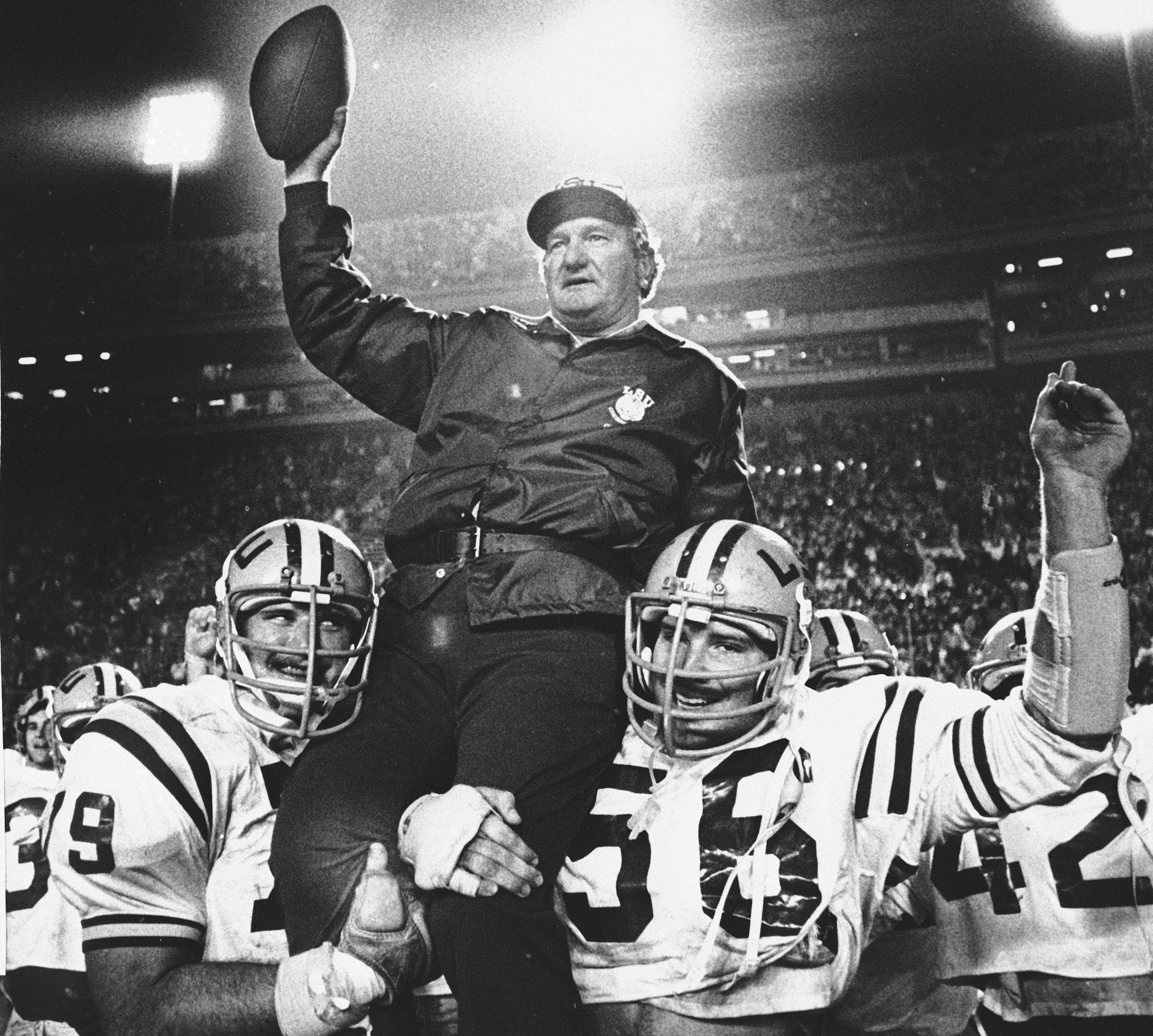 Beginning in 1977, the Tigers debuted what is essentially their modern helmet. It featured the curved LSU lettering above the Tiger logo, as is still the case to this day. The only real difference was that these initial helmets featured a gray facemask as opposed to the purple one that would replace it after just three seasons. 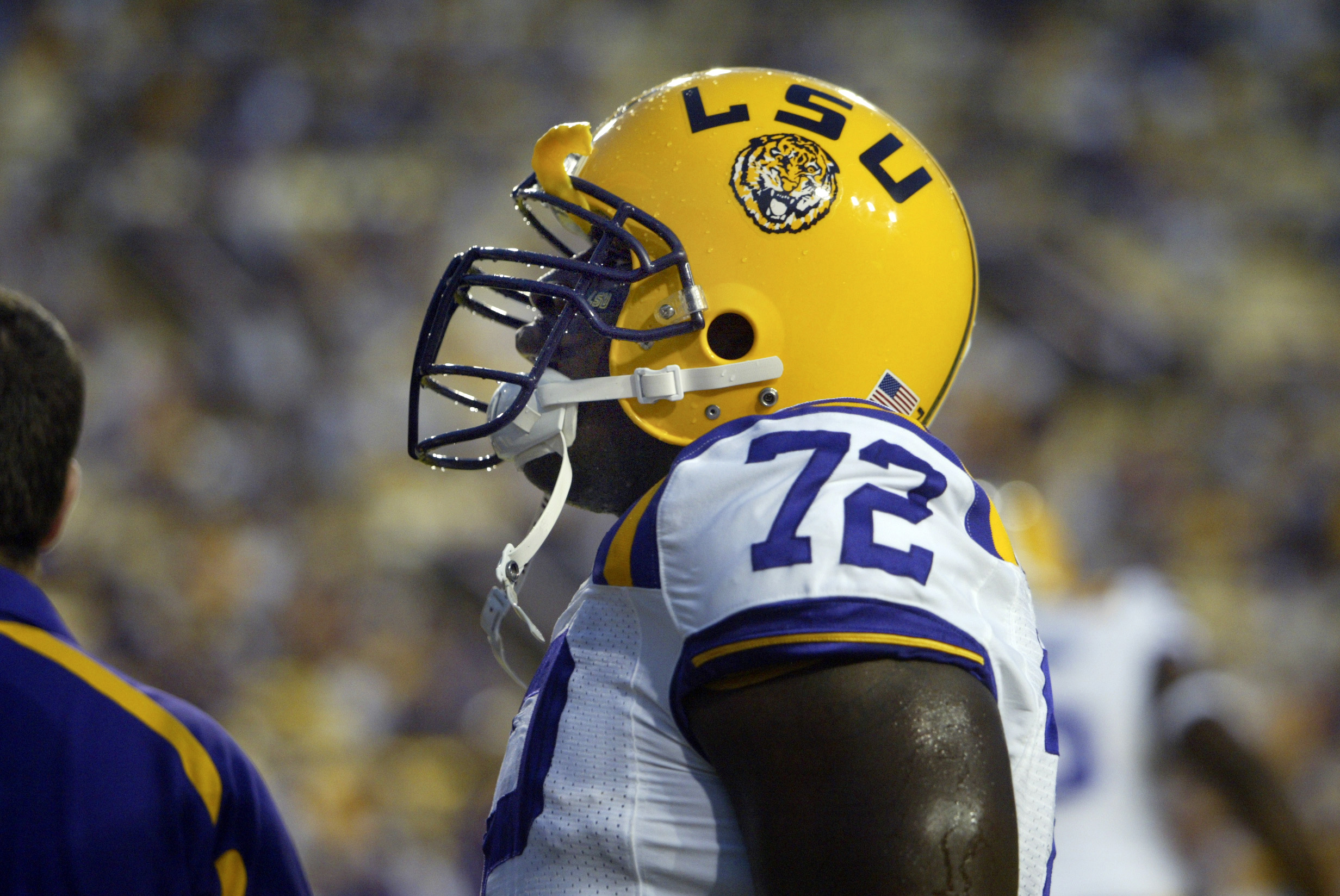 LSU added the purple facemask ahead of the 1980 season, resulting in a design so timeless that it would hardly be changed at all for more than three decades. These iconic lids were donned for LSU’s national title runs in 2003 and 2007, and some of the best seasons in Tigers history are associated with these. Aside from the occasional alternate, these remain LSU’s go-to helmet. 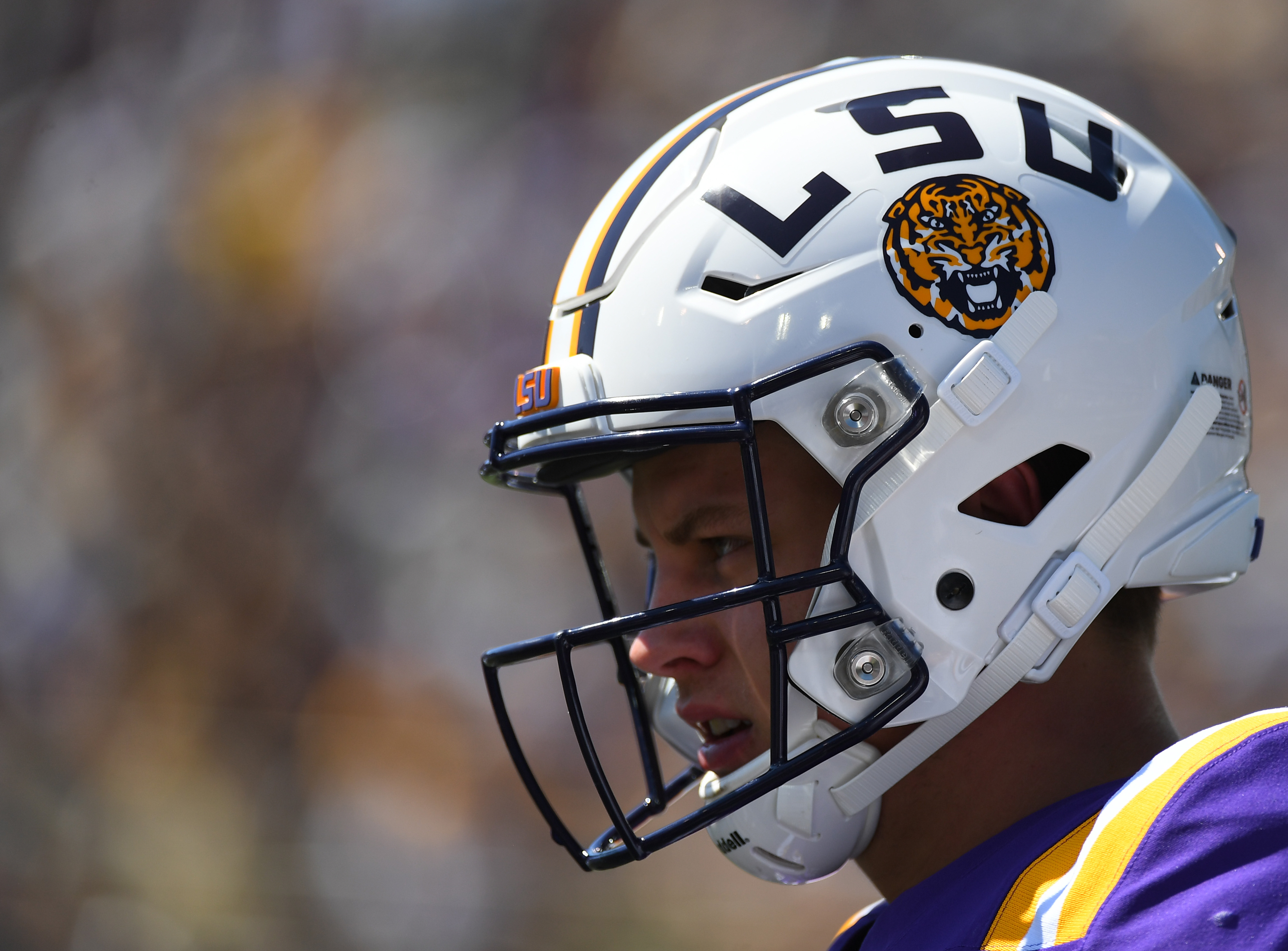 The most commonly used alternate for the Tigers, the white helmets made their first appearance in the 1997 Independence Bowl against Notre Dame. They were used again a decade later to promote Hurricane Katrina relief in 2007, and they’ve been used sporadically since, most recently against Texas A&M last season. 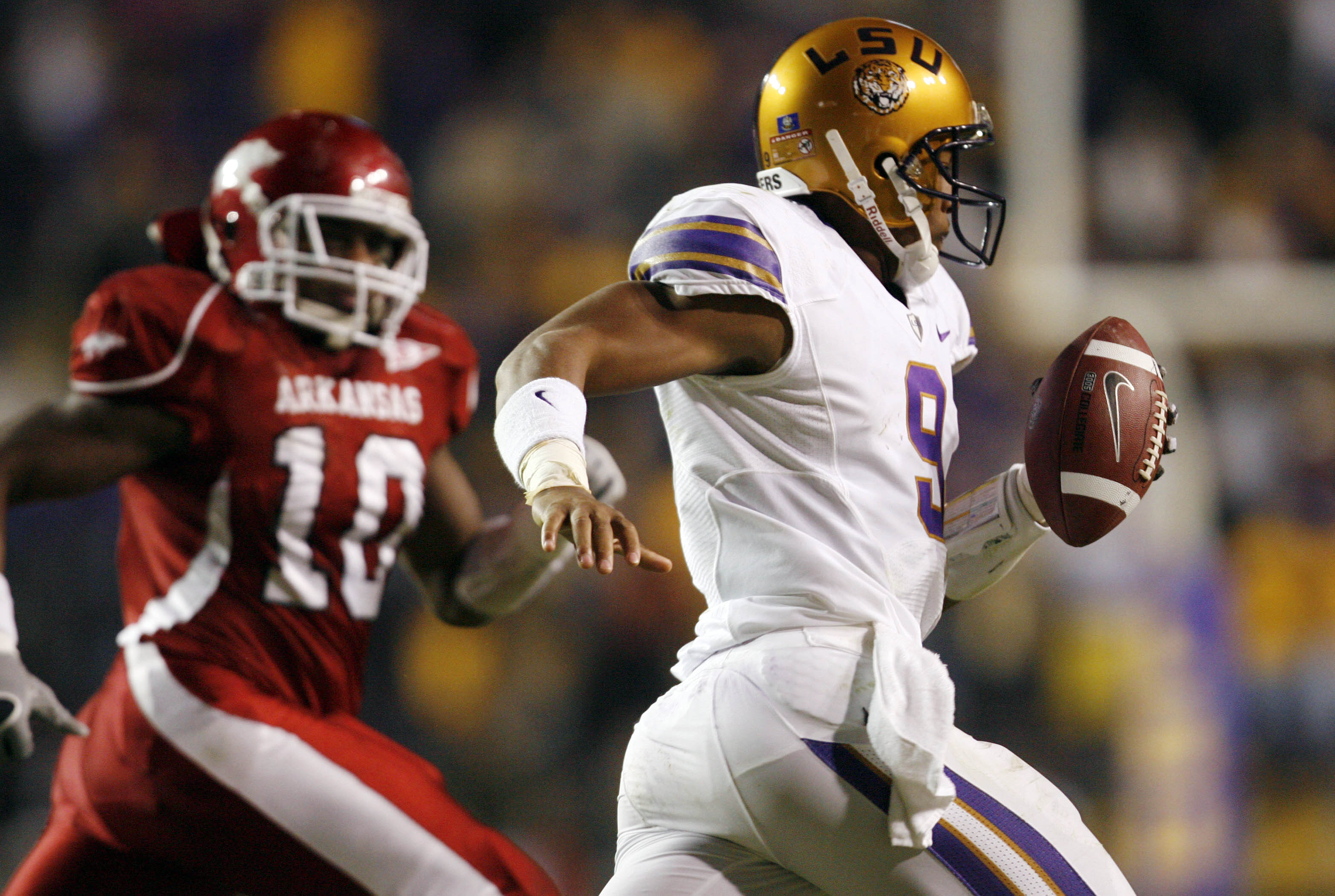 LSU paid homage to its 1950s look in a 2009 overtime win against the Arkansas Razorbacks. These old-gold helmets in the modern style were part of the Nike Pro Combat series, and the uniform set was dubbed “Couchon De Lait,” which translates to “pig roast” in cajun. God, I love the SEC. 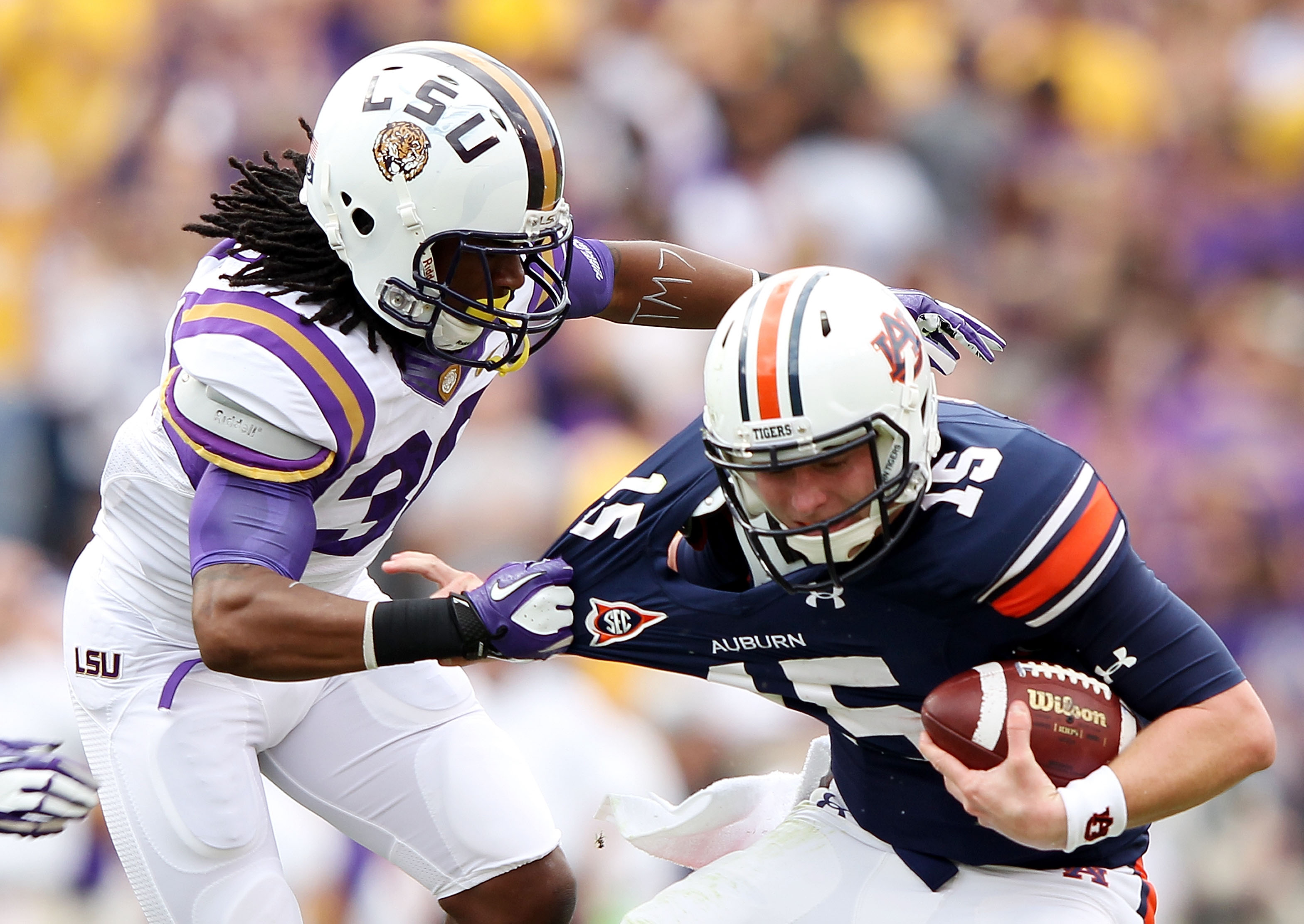 LSU got another Pro Combat look in 2011, and like the one it wore in 2009, these uniforms were only worn once for a game against Auburn. These all-white uniforms also featured a white helmet that looks very similar to the alternates but features a gold stripe down the center instead of a white one. 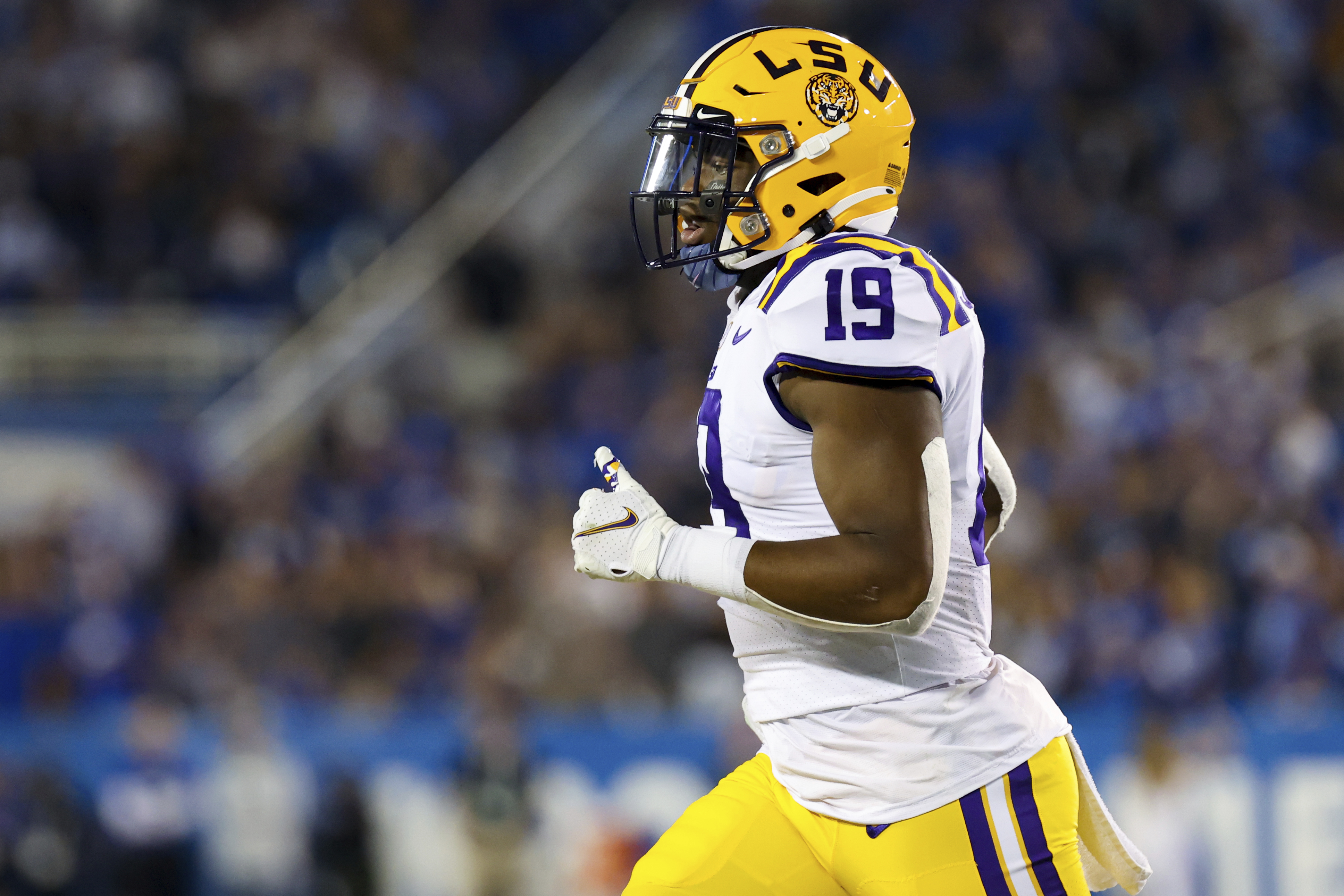 You would be forgiven for not even knowing that LSU changed its primary look back in 2014, but indeed, the design was tweaked slightly to make the Tiger logo a bit more menacing. I suppose these are a bit scarier? Regardless, LSU wore these during its best season in school history and one of the best in the history of college football in 2019, so these will always hold a special place in Tigers lore. 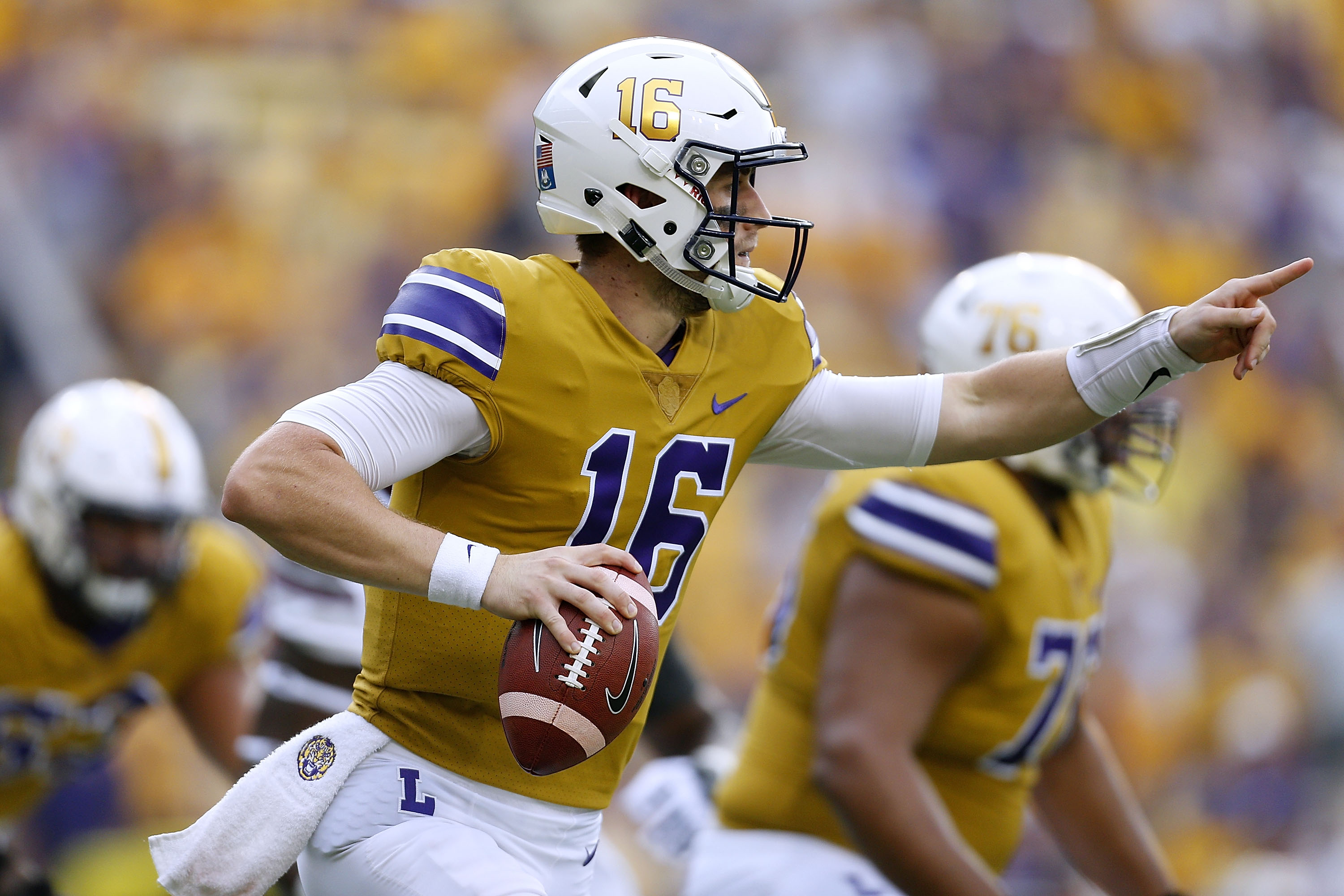 LSU debuted another white helmet look against Mississippi State in 2016, which features jersey numbers on the side and the original LSU “L” logo. These throwback uniforms have only been worn once. 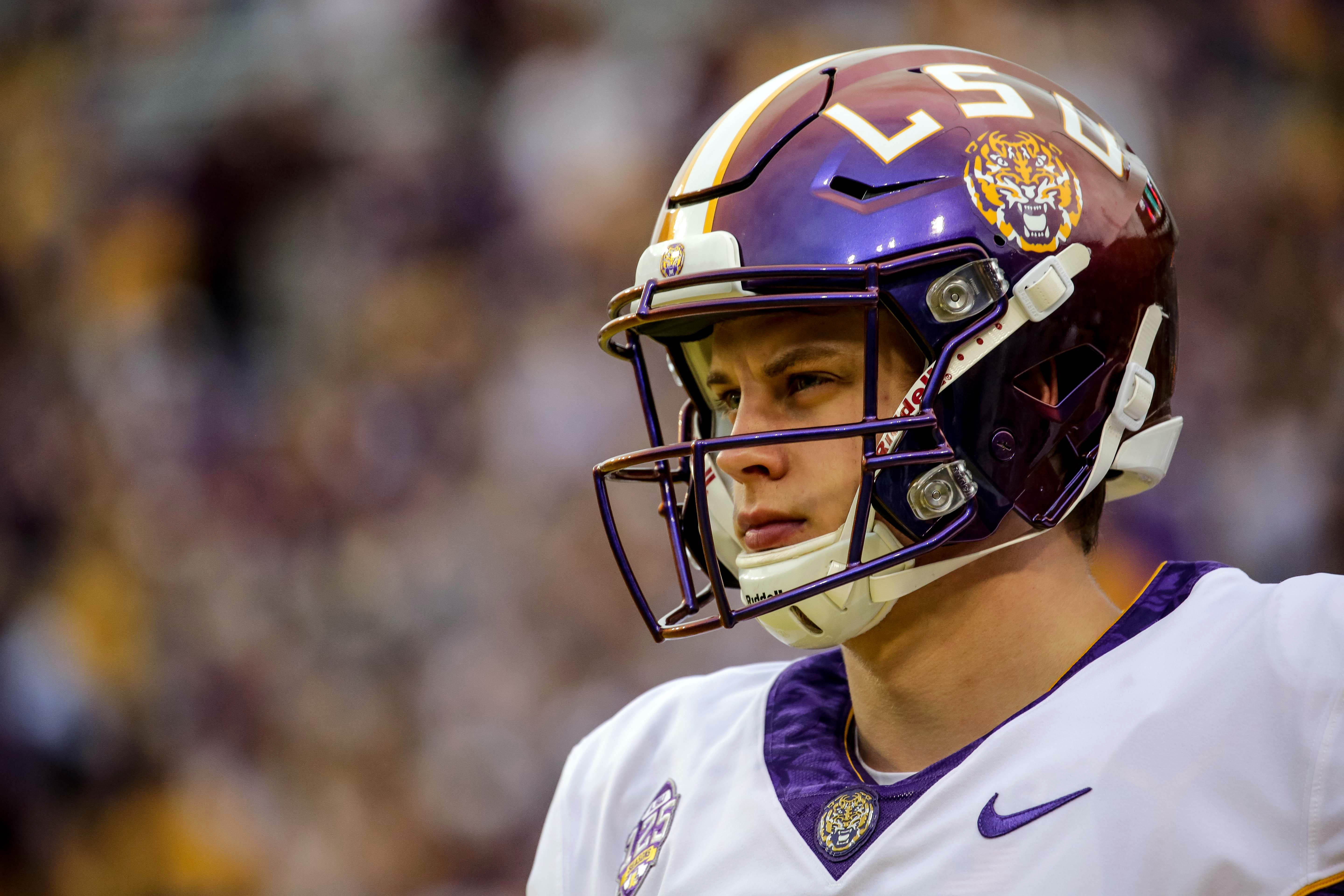 LSU sure likes to show off new uniform looks against Mississippi State, and it did so again in 2018 with these all-new purple helmets. Like many of the prior alternates on this list, these haven’t been worn since. I don’t know about you, but I think this is a pretty sweet look that the Tigers should consider bringing back at some point. 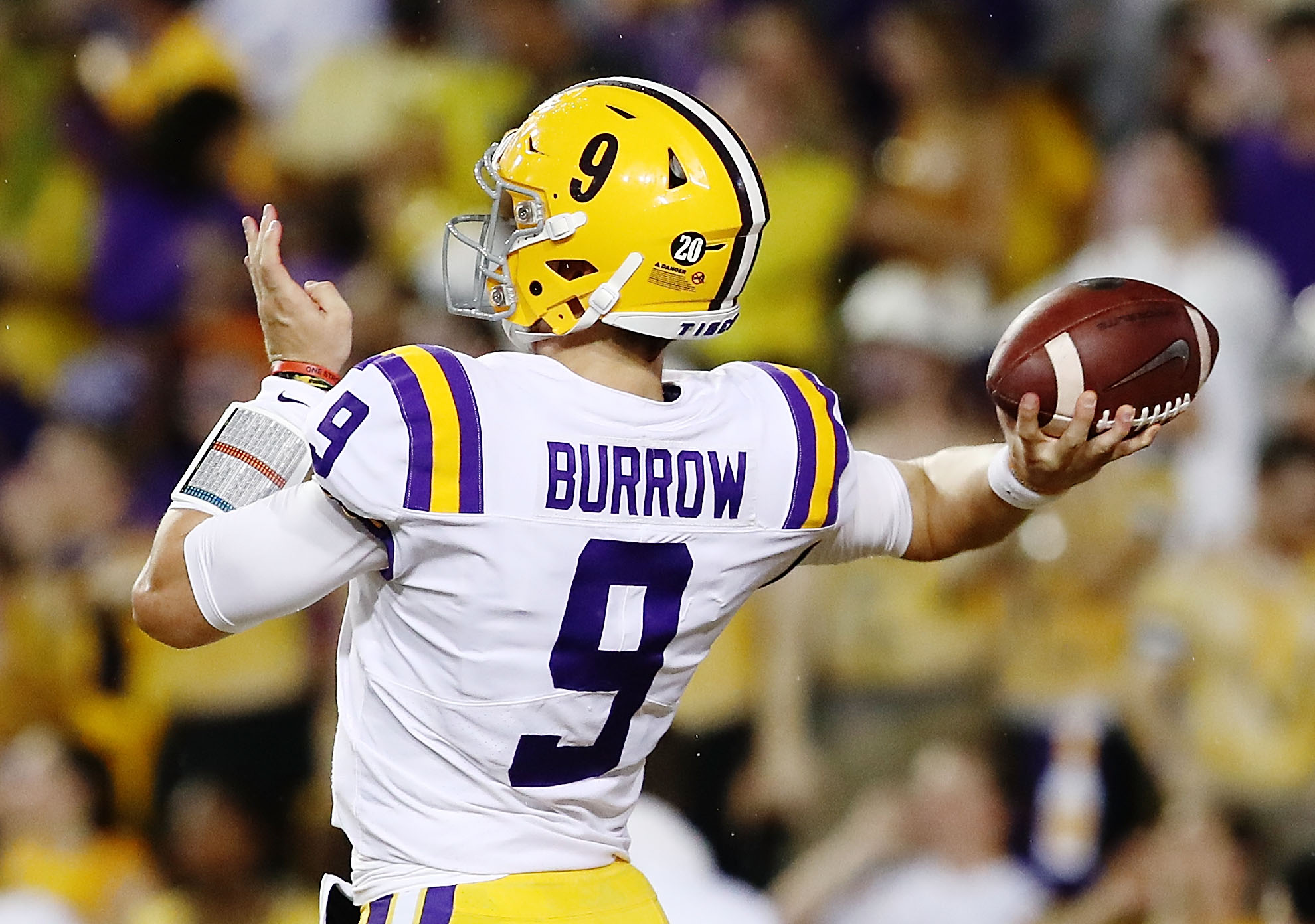 The purple helmets weren’t the only one-time look tried during the 2018 season. Against Ole Miss, LSU wore its normal jerseys but swapped the usual helmet sticker for jersey numbers instead. It may be a little bit jarring when it’s not part of an alternate uniform set, but this is still pretty slick.