For the Tigers, the 2022 season amounts to a series of harsh reality checks, one stinging slap after another. By now, the lesson is clear: A rebuild does not end with the signing of one or two free agents, or the promotions of one or two top prospects. Even the best teams continually chip away at their deficiencies. And only through proper evaluating and deft maneuvering can a middling club like the Tigers ascend to elite.

The Tigers, 26-42 and 11 1/2 games out of first place in the weak AL Central, are far from ascendant. Injuries are not solely the reason, even though emerging star Tarik Skubal is the only member of their Opening Day rotation who is not currently on the injured or restricted list. If anything, injuries are to be expected for a team built around young pitching. Yet, the Tigers sunk to a low point last Wednesday when manager AJ Hinch, despite operating with a 10-man bullpen, concluded a 13-0 loss to the White Sox by using three position players to pitch.

Frankly, the Tigers ‘hitters can’t be less effective on the mound than they are in the batters’ box, where almost midway through the season, they are performing at a historically futile level. The Tigers are averaging 2.88 runs per game, the fewest by any team since the 1968 White Sox. That’s right, every team for nearly 5 1/2 decades outscored the current Tigers, including those in the NL that had pitchers hitting until last season.

Of course, the Tigers are not the only club that has yet to reap the supposed benefits of rebuilding, which in their case began with a teardown in 2017. The Mariners, Royals and Marlins, all of whom anticipated improvement this season, are also disappointments. . The Pirates and Orioles, even while showing signs of promise, might still be years away from contention. The Reds, Nationals and Athletics, at the moment, are simply lost causes.

The Tigers ’collapse, though, is particularly exasperating. This is a team that held top-five selections in the amateur draft in each of the past four years. A team that appeared to take a step forward last season, its first under Hinch, going 69-63 after an 8-22 start to finish 77-85. A team that spent $ 235.5 million on four free agents while also adding catcher Tucker Barnhart and outfielder Austin Meadows in trades. And for what? The Tigers ’sixth straight losing season seems all but inevitable.

“I’m as angry as anybody, more angry than anybody,” general manager Al Avila said. “We’re all angry. And we’re all accountable – including the players. Right now, we’re re-evaluating and scrutinizing everything in the front office, player development, scouting, our staff and our players. When this happens, it’s not a person or one department or one player. This is team-wide. ”

Avila concluded by saying, “We’re all obviously working hard to turn this around. And we will. ” Rival executives, however, question whether Avila is creative and savvy enough to build a consistent winner. Some in Detroit, meanwhile, wonder if Hinch might bolt, pointing to an April 2021 report that said his contract included an opt-out clause.

Avila said Hinch’s contract includes no such clause. Hinch, in his second year with the club, has never said anything to indicate he plans to abandon his long-term commitment to the organization. His contract, according to sources, runs for five years, from 2021 to 2025. Avila’s deal expires sooner, but its exact length is not known.

To some extent, the Tigers’ season is a perfect storm of calamities, from injuries to young pitchers such as Casey Mize and Matt Manning to the offensive struggles of $ 140 million free agent Javier Báez to the reported marital troubles of $ 77 million free agent Eduardo Rodríguez , who has been on the restricted list, unpaid, since June 13.

But with Báez, the Tigers banked on a notorious hitter for his lack of plate discipline. With Rodríguez, they bet on a pitcher who never had led a rotation. And while hitters such as Jonathan Schoop, Jeimer Candelario and Robbie Grossman inexplicably have cratered, the Tigers are also haunted by past blunders.

• Meager returns in trades for Justin Verlander, Nick Castellanos and JD Martinez, compounded by failures to move pitchers such as Michael Fulmer and Matthew Boyd when their values ​​were highest.

• A drought of homegrown position players that predates Avila’s hiring as GM in Aug. 2015, but might be on the verge of ending with the arrivals of two top-five picks, first baseman Spencer Torkelson and center fielder Riley Greene.

• An international program that, while showing signs of improvement, has produced only one positive WAR player, closer Gregory Soto, since the trade of Willy Adames in 2014.

Avila and others with the Tigers believe the future remains bright. The 2023 rotation could include Rodriguez, Skubal, Spencer Turnbull and some combination of Manning, Beau Brieske and Alex Faedo, with Mize possibly returning from Tommy John surgery toward the end of the season. Greene and Meadows (acquired for Isaac Paredes, who hit three homers for the Rays on Tuesday night) will likely be two of the starting outfielders. Torkelson, though he soon might require a minor-league demotion, will be at first, and Báez at short. 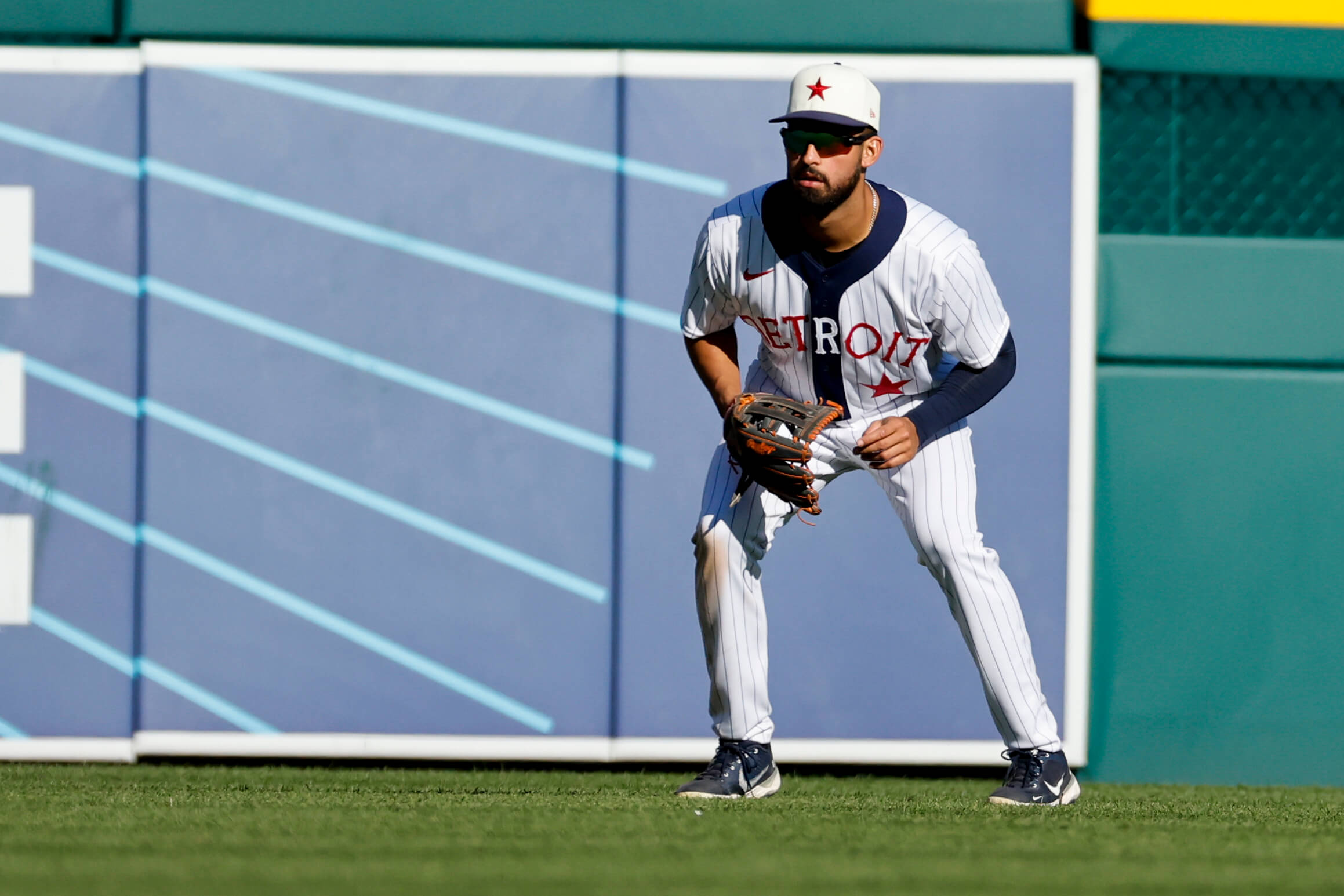 On the flip side, catcher remains a position of uncertainty. The Tigers will also need to figure out whether to stick at second with Schoop, who is signed next season for $ 7.5 million, and at third with Candelario, who is earning $ 5.8 million and would appear a strong candidate for a non-tender. But they might be in a position to trade a starting pitcher for a left fielder, and again will have money to spend. The team has $ 84.65 million committed next season, and after the expiration of Miguel Cabrera’s contract, that number drops to $ 51 million in 2024.

The problem, of course, is that Avila did not always spend well even when the team was in contention, as evidenced by the five-year, $ 110 million free-agent contract he awarded Jordan Zimmermann in Nov. 2015. Intent on filling the Tigers ’longstanding hole at short last offseason, Avila discussed with free agent Carlos Correa a 10-year, $ 275 million structure that included multiple opt-outs and escalators, sources said. But Correa wanted $ 300 million-plus, and of the other available middle infielders, Báez emerged as the most realistic target. With the exception of Correa, those others – Corey Seager, Marcus Semien, Trevor Story – have also performed well below their career norms.

Báez, 29, might never fulfill his offensive promise, but eventually should be good for above-average defense and 25 to 30 homers per season. Rodriguez, also 29, should at least be an above-average major-league starter. Yet even if those deals work out, the Tigers will have so much more to do. Eight of their top 13 prospects, according to The Athletic‘s Keith Law, are from the last two drafts. The vast majority of those players, however, will not be ready to join the Tigers anytime soon.

The Tigers have had some modest successes with Rule 5 picks (Victor Reyes, Akil Baddoo), minor-league signings (José Cisnero, Wily Peralta), even undrafted free agents (Jason Foley). But the low-revenue Guardians and Rays are more adept at identifying and developing above-average players, and high-revenue teams such as the Dodgers, Giants and Yankees routinely come up with significant contributors for minimal acquisition costs. Who is the Tigers’ Chris Taylor? Their Mike Yastrzemski? Their Clay Holmes?

Under Avila, the Tigers upgraded their technology and built an analytics department they say now consists of 12 members. They recently began spending more on individual international players rather than spreading their money around on lesser signings. Perhaps they can move one or more of their better relievers at the deadline for returns that would increase their overall depth.

High-end pieces are in place. Resources are not a problem. But when PECOTA projected the Tigers for 67 wins and Fangraphs for 77 at the start of the season, it was a clear indication that the team, for all its high draft picks and free-agent signings, was still short on talent. And right now, with the Tigers on a 62-win pace, those projections seem optimistic.

Winning teams excel not only at evaluating players with other clubs, but also their own. The only reasonable conclusion to draw from the Tigers ’mess of a season is that they are failing on both fronts.